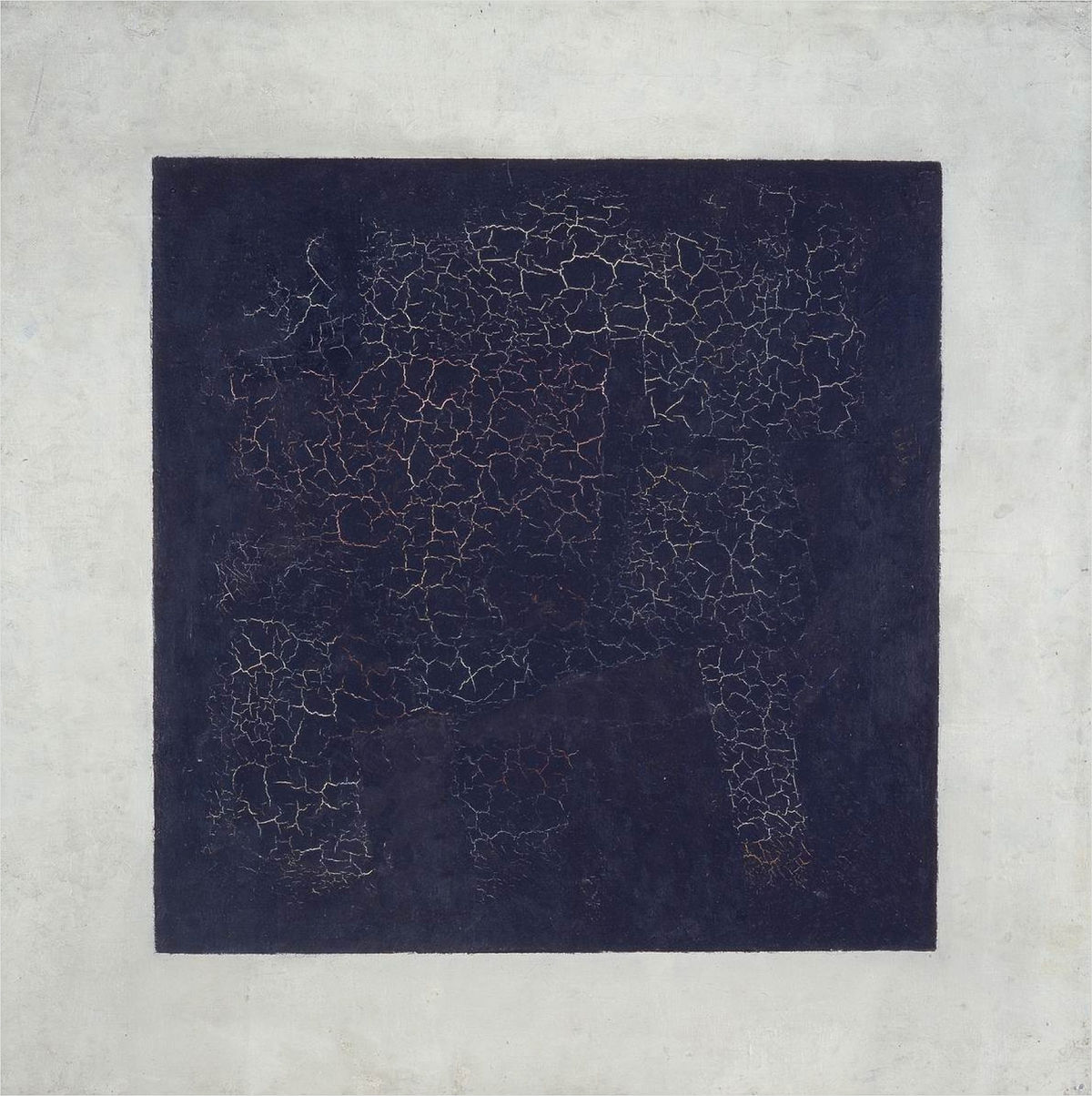 One of the key subjects of ‘De protodood in zwarte haren’ is ‘Black Square’ (1915) by Russian painter Kazimir Malevich (1879 – 1935). This painting can be seen as the first and most important work of suprematism: one of the pioneering modernist abstract art movements. Suprematism rejects any sense of naturalism or figurative painting. Instead, it uses geometric shapes and colour, in order to create a purer form of art. As its name implies, suprematism is founded on the principle of the supremacy of colour and shape over superficial depictions of nature.

Malevich was an influential art theorist, who extensively wrote about the ground principles of suprematism and modernism in general. In what can be seen as his main work ‘From Cubism and Futurism to Suprematism: The New Painterly Realism’ (1915), Malevich uses the example of the ‘savage’ (likely a term referring to an archaic humanoid), whom, by drawing simple sticks and a dot, attempted to transmit his own image onto a cave wall. This is where the aim for approaching the face of nature as closely as possible first arose.

According to Malevich, the savage developed his consciousness in only one direction: toward nature’s creation. By embracing nature, the savage attempted to recreate it in his art, which merely resulted in a weak distortion of reality.

Prior to the avant-garde, western art was founded on naturalism. As Malevich addresses, many painters strived toward the perceived aesthetic excellence of the Renaissance. However, this aestheticism drove artists away from the nature they once admired, and resulted in them creating parodies of it.

‘The ‘Venus de Milo’ is a graphic example of decline.’ Malevich writes in ‘From Cubism and Futurism to Suprematism’. ‘Michelangelo’s ‘David’ is a deformation.’

The complete rejection of naturalism and aestheticism is most clearly echoed in Malvich’s masterpiece ‘Black Square’. This absolutely radical and frightening painting can be seen as a pure expression of abstraction. It is a void, projected onto a canvas, equally confronting and mysterious. It is infinitely screaming nothing, yet it cannot be silenced.

In ‘De protodood in zwarte haren’, Pedro, the story’s protagonist, is obsessed with ‘Black Square’. As intended by Malevich, the painting is seen as an absolute void, from which literally anything can emerge. Pedro sees this painting as the future of art, and, possibly, of life in general: it is the complete rejection of the physical world; the one we have rationally constructed around us.

This rejection of the physical world can be recognised from ‘Victory over the Sun’ (1913): a Russian futurist opera, for which Malevich created the decors and designed the costumes. Writers and collaborators include poets Aleksei Kruchenykh and Velimir Khlebnikov, and composer and painter Mikhail Matyushin. In ‘Victory over the Sun’, a new race of people manages to capture the sun. Dressed in painted cardboard armor, they shout ‘The world will perish, but there is no end to us!’

This expression of victory over the natural/traditional world can clearly be seen as a political, anti-tsarist act, which it certainly was, but it is equally a bold introduction of a new era: an era in which mankind is no longer dependent on the forms of nature; where man can move past the limitations of the past. It is no coincidence that the backdrop for ‘Victory over the Sun’ was, in fact, a black square. 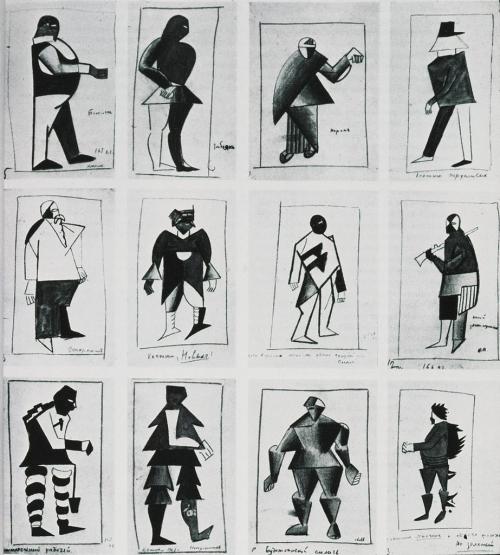 Costume designs by Malevich for ‘Victory over the Sun’ (1913)

In ‘De protodood in zwarte haren’, Pedro’s becomes more and more obsessed with abstraction. He understands the implications of his acceptance of Malevich’s work: the embracing of pure abstraction creates a boundless nothingness. It is the birthplace of all ideas, shapes and forms. Tearing down the physical world becomes a major objective in Pedro’s life, gradually sucking him into the void he surrounds himself with. In the novel, Pedro compares looking at ‘Black square’ to closing his eyes: by rejecting sensory impulses, he creates a crevice in his rational perception. When this crevice is kept open, it is able to give birth to any shape. This unknown, unperceived shape is given total freedom to grow inside the subconscious, and will, once the eyes are finally opened, appear as a manifestation of absolute horror.